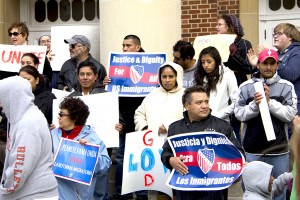 More than 100 people attended the Adams Unity Coalition’s unity vigil on Saturday, November 9, 2013, standing together on the steps of Gettysburg College’s Christ Chapel in support of racial justice, peace, and immigrant rights. Representatives from Gettysburg College, Casa de la Cultura, Manos Unidas, and the Adams Unity Coalition spoke and led the crowd in prayer and song in English and in Spanish.

Unity Vigil in the News

There are no upcoming events.