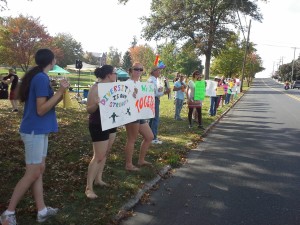 Photo from “Voices of Unity” sponsored by the Adams Unity Coalition held at the Lutheran Theological Seminary on October 5, 2013

On October 5, 2013, the Adams Unity Coalition sponsored “Voices of Unity,” a rally held on the lawn of the Lutheran Theological Seminary of Gettysburg.  The event featured music from local performers Charlie Fry, Linda Coe, Bob Anderson, and Jim Muratore.  Instrumentalists Emma Rainoff and Jonathan Danchick from Gettysburg College also performed. Prayers and other remarks were offered by representatives from various faiths, including Judaism, Hinduism, Islam, Christianity, Buddhism, and Unitarian Universalism. Adams County Commissioner Randy Phiel read a proclamation declaring October 5, 2013 “Voices of Unity Day.” Children of all ages participated in a variety of fun activities, including face-painting, sign-making, bubbles, and hula hoops. A highlight of the event was an activity in which participants wrote a wish or a prayer on a piece of paper and hung it on a tree with yarn to blow in the wind.

Voices of Unity in the News

Visit Voices of Unity on Facebook  to view pictures from the event.

There are no upcoming events.